Peace of My Heart

An encouraging voice to drown out the noise

If you ever wonder why there is racism in the world, take a look at how the media runs the headlines.

“An unarmed black male is shot down by a Hispanic.”

“A group of white teens brutally attack an Asian girl.”

(These are not actual headlines but are very similar to ones I have seen recently in the news.)

Why is there any reason to include the race, ethnicity, religious background, etc. in the headline?  Does it matter what the color of skin is?  Isn’t the issue that a child was bullied, an innocent person shot or that a girl was beaten?  Why make issue of the race of the individuals involved?  Shouldn’t we be outraged that a crime was committed and leave it at that?

When I read these type of news feeds, my stomach turns.  Not only because of the violence that is running rampant in our world, but because we are being fed hatred for one another based on skin tone.  It’s horrendous and shameful.  The media is using hate and discrimination to up their “numbers” all the while fueling the sickness that is tearing God’s people apart.  News stories such as these cause white children to fear their black classmates, or everyone who isn’t white to fear bald-headed, tatted-up men.  Does anyone else find this wildly offensive or is it just me?!  Those in positions of influence are using their “power” to create unwarranted, irrational fears between God’s family and this should not be!

Yesterday I shared a Scripture with my facebook friends:

“There is no longer Jew or Gentile, slave or free, male and female. For you are all one in Christ Jesus.”

Either you believe this, or you don’t.  We were all created in God’s image, every last one of us.  We were placed on this earth for a purpose and I can assure you that not one of us was created to spread racial discord.  In Romans 2 verse 11 it says, “God shows no favoritism.”  Then in James 2 verse 9 we are told “if you favor some people over others, you are committing a sin. You are guilty of breaking the law.”  If the Lord who created the heavens & earth and everything in them is not interested in giving preferential treatment of any one people group over another, than who are we to do just that? 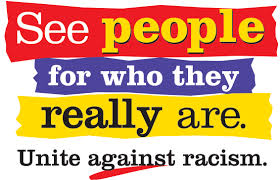 **If I may add, I can’t stand referring to human-beings as a color!  This entire post was meant to make a point that we are not defined by the color of our skin nor should we pass judgment based on the same.**